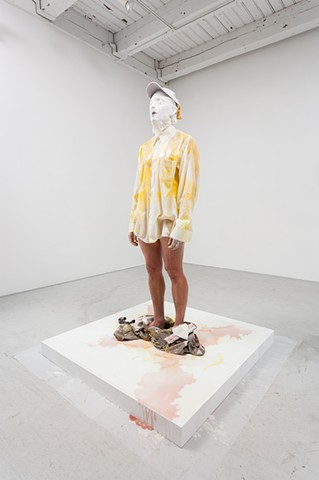 WRECK was performed as part of a three person show "Revolvers Are Meant for Crocodile-skins" curated by George William Price at the Chicago Artist Coalition featuring work by myself, B. Quinn, and John Steck Jr. WRECK 2016 was a three hour durational performance, I staged myself as a sculpture of a normative white male that was "melting" caught pants around his ankles leaking, unable to speak or move. I was covered in corn oil and body paint sold to sports fans, my face covered in plastic that ballooned and waned with my breathing like gills. The Oil and paint soaked my white men button up and khaki paints, a costume I re purposed from "You Are Not Yours" an earlier manifestation of this business casual specter. Photographic Documentation by Robert Chase Heishman